I took on the might of Ben Nevis with two other OCD sufferers –  who contacted me through the website after seeing the BBC Highlands article – supporters and a lovely Labradoodle called Georgia, who put us all to shame :p

It was a brilliant day. Great to meet up and talk about OCD with other people, all the while taking on the challenge of Ben Nevis and encouraging one another.

We climbed from the bridge starting point as opposed to the more traditional visitors centre. This made for a steeper initial accent which certainly put us to the test right away. As you can see from the first photo in the gallery below, the day before had been perfect weather. Whilst we weren’t so lucky, the rain did hold off during the climb, and actually the cooler conditions probably helped. The higher we climbed into the clouds, the more the wind picked up and soon visibility was at a minimum. Amazingly despite it being the middle of summer there was still snow atop the mountain – which proved fun to ski back down later with walking poles.

It was such a great sense of achievement reaching the summit and even better to have done it as part of such a brilliant team. Couldn’t help but give a fistpump. OK there weren’t any real views to speak of from the top, but in a way I think the atmosphere added to the experience.

Ben Nevis, you were awesome. Scafell Pike and Snowdon, you’re next. 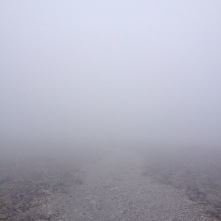 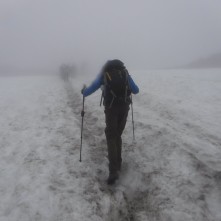 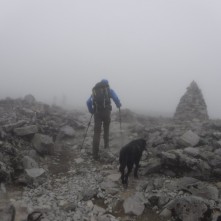 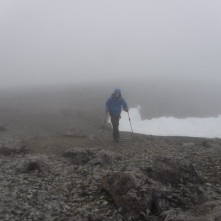